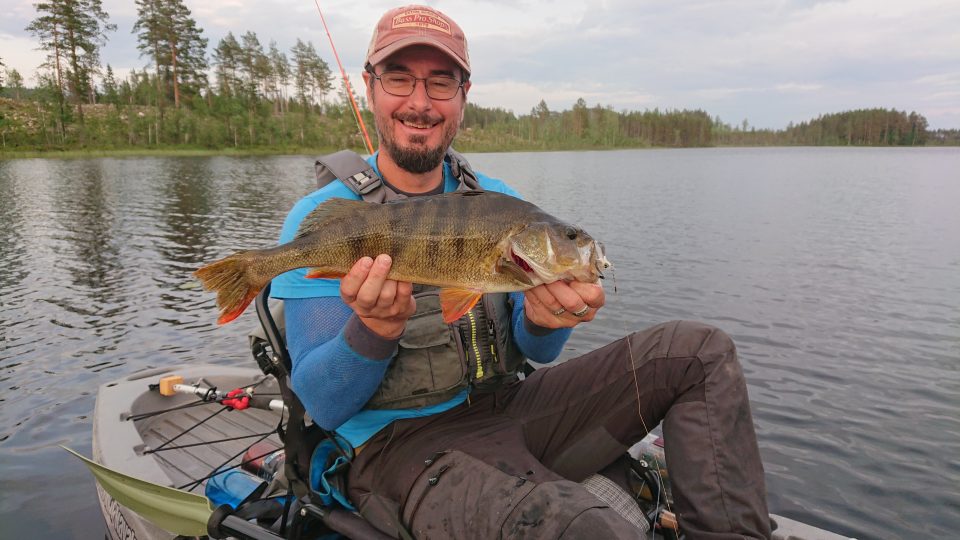 Scroll down for English version

The premiere was here! Time to test the rumor about Big Perch!

Today I tested one of my Jackson Bite for the first time, and what premiere it was!

The mission for todays fishing was to test a rumor i heard last year. The rumor had told about a small lake in the woods that was supposed to inhabit huge Perch, and alot of them. Me and my friend had been to the lake one time previous in last fall, and in cold windy and rainy weather my friend had managed to hook land a Perch that was 52 centimeters long!! Now the time had come to see if the little lake could live up to the rumor and continue to procuce big Perch…

Two hours of fishing with jig and crank only resulted in a couple of small perch in the kayak and a really nice pike that snagged it self in the bottom and got loose. Then I picked out my Orvis eightweight!

It only took two casts with the fly around a man made branch shelster when something crached the fly and all hell broke loose. I thought at first that I had hooked a big pike, but after a series of heavy shakes and rushes I realized that one of the old warrior Perch of the lake had taken the fly. The old warrior made clear that it did not want to leave the security at all at the branches where it had lurked, and now it gave me a couple of minute’s of hard struggle to keep it from getting back there.

I managed to get it out on free water when it got completely wild and made another rush to the safety of the branches. With as much pressure on the line I dared, I yet again managed to get the perch back to the kayak and finally i got it in sight. I then confirmed my guess that it was one of the old and large ones in the lake, and one rush later it layed safely in my net. The feeling! The feeling! I yelled out my joy and relief in to the late warm summer evening in the forest, and I think it may have been heard all over Sollerön’s Fishery Area!

After weighing and measuring i paddled back to the same spot and not more than another two casts later a nice Pike threw it self over the fly. About 4 kilos and incredibly strong she gave me a hard fight before she gave up. A fresh wound in the mouth let me know that it was the same Pike that had played me earlier, but this time i got the final say!

Another decent Pike got to see the inside of the net before ominous clouds gathered and we decided to hed for home thrue the woods, and to be able to sit in the car and look at a big bull Moose for a couple of minutes became the perfect ending to a perfect day!

Oh…i should have written a few words about what i think of the Bite, but this perfect evening of fishing made me totally forget. Well well…i save that for a rainy day!

Exciting news for this summers guiding and fishing